Some Thoughts on Tracking Shoes 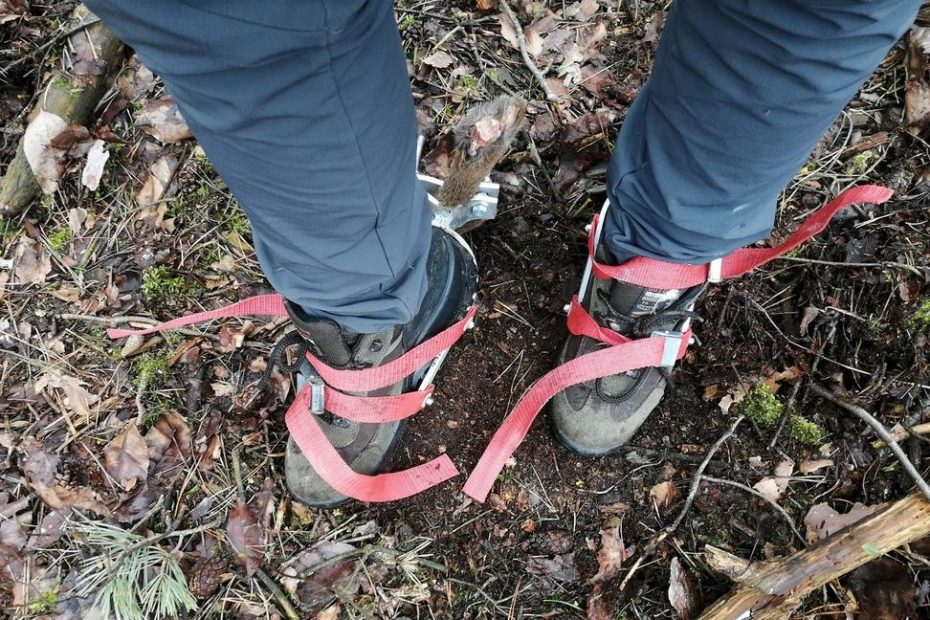 On a recent driven hunt, I was sitting in a car with some fellow hunters following another car to the starting point of the hunt. As we were driving, I asked how everybody in the car memorizes a vehicle they have to follow, in case something happens and you loose track of it for some time.

The answers were very different. One memorized the number plate, another the brand of the car, the third one the colour. In this case, I knew that the car had a big sticker with pointing dogs on the back window. You could beat me to death, I could not tell you either the number plate, nor the brand or colour of it once it was out of sight.

Interesting that we are all the same, eye-oriented species, thus using different visual clues to memorize a specific object.

When we talk about tracking dogs, many handlers seems to be 100% sure what their nose-oriented dog actually follows when working an artifical track. At the moment, many handlers throughout the world started using tracking shoes instead of blood more and more. They say it is a much more realistic way to mimic the track of a real wounded animal. Is this, in fact, really changing the whole experience for the dog dramatically? Or is it the equivalent of replacing the tyres of the car from our example by another brand – nobody of the followers would care or even notice, as they are focusing on complete other things?

Tracking or hoof shoes are special shoes you put over your normal shoes, and attach a deer hoof to each one of them. There are two main reasons to do it, according to the people favourising them:

Sounds absolutely logic, and so I did hundreds of tracks with hoof shoes, sticking also to the recommendations of using them only 3 times (because then the gland is empty, I guess?!?) and always using the same deer and the corresponding hooves (like two backhooves… because it is more common for deer to walk on their back legs than using one front and one back leg?!?). I did not think much about all that at first, to be honest.

Let´s look a little bit closer at the first argument. I was once at a hoof track working test with one of my dogs, and at one point we came to a small slope. A roe deer, wounded or not, would have jumped down. The person doing the track was obviously old and very heavy, and struggled much to get down. He left a big slide of ground disturbance, using the hoof shoes as brakes. With 8 times the body mass of a roe deer, distributed among only two legs instead of four, you can surely imagine the ground disturbance being not even close to what an animal would create.

There is one anecdote used in many tracking and hunting dog books that is quite interesting. It is seen as the proof that tracking dogs actually work the ground disturbance made by tracking shoes. The experiment was the following: a track was made with tracking shoes leading to a tree stand. Then, the light person doing the track switched positions with a heavy person waiting in the tree stand. Now, the ground disturbance was, of couse, different, as the hooves did enter much deeper in the soil. The tracking dog did the track till the point the two persons switched, and refused to continue the track. So, the conclusion was: it is the specific ground disturbance the dog is following!

From a scientific point of view, this is ridicolous. You cannot remove a such huge factor like the person doing the track, and then conclude that a tiny change in the penetration depth of the hooves is the only thing that counts. Most likely, the dog was simply following the scent trail of the living, permanently scent-emitting human – and stopped working when it lost it.

I have my own experiences to add: one time I lost both hooves at the very beginning of the track and didn´t notice it till I was done. As I did not want the track to go to waste, I put one of my dogs on it to see what happens. The dog found both hooves and kept tracking as nothing ever happened. I made the same experience with the four other dogs I had, and also with the dogs of others. Most of them did not even twitch when passing the mark where I removed the hooves. Does that mean they do not care at all about them? Hard to tell. A dog´s nose is able to smell a drop of blood on a surface that was cleaned with chemicals after days or even weeks. We may think we removed the hoof from the shoe, but maybe actually there is enough hoof particles left on its surface to make another 100 km of track.

Also, the shoe on its own is creating a huge ground disturbance – maybe much more prominent that the one created by the hoof, maybe not. We do not know for sure. Going back to the car example, when you are focusing on the colour of the car when following it, you do not care if the wipers or mirrors suddely disapear.

So, ground disturbance may be a huge factor on the track, but it is happening with or without the hooves with every cumpsy step we make.

Let´s move on to the interdigital glands. We do know that deer create a track for fellow deer to follow or to avoid. We do know that the glands produce a mix of more than 40 different volatile compounds, including alkanes, arenes, aldehydes, ketones, aliphatic acids, esters, pyrroles, furans, and sulfur compounds (link to study). This mix carries information like sex and age of the specific deer.

I could not find any study that actually evaluates what happens to this mix after death. But obviously, a dead deer is not producing any of these compounds anymore, and the gland, as any other body part, goes into the decomposition process. Depending on the chemical structure of the different compounds inside the gland, some will decompose faster than others. We know from cadaver dog training that our fourlegged companions can tell the scent of a living individual apart from a dead one – even if it was killed just recently. When I kill my husband, and then drag it all the way down to my car, a cadaver dog knows that the body was dead during the drag and not inconscious or only badly wounded. This makes sense, as for a wild canine, knowing the difference between an alive animal and a recently passed one is crucial.

So, it is impossible to trick a dog into believing that the scent track we make with cut off, defrosted deer legs is actually from a still living, wounded deer. Nevertheless, we can argue that it is all about teaching the dog to follow this specific deer track and ignore any other track. As I pointed out, all dogs that I tested moved on tracking even if the hooves where removed. Still, there might be enough scent left on the shoes to carry on tracking. Or, is the dog simply following a human-only track now – or even focused on the human scent from the very beginning?

There are far more studies and also knowledge about police dog nose work and men-trailing as there is about hunting dog nose work. We hunters often rely much more on what whe have been taught from others, or what we figured out by ourselves – without actual proof we are right.

Let´s take a look on police dogs trained for finding drugs. Their playtoy is stuffed with a mix of all drugs they might get in touch with later. Let´s assume that 10 different substances are in the toy, creating (together with the compounds of the toy itself) an odor profile – an individual mix of odors characteristic to the specific object. The police dog is yet able to find a single of these subtances later in life, as it associates it with its playtoy. It is not irritated by the fact that the other 9 are missing.

Introducing our hunting dog to the artificial hit spot, we confront him with the odor profile of the individual track we want it to follow. One very dominant part of it is surely the human scent. A human is, in fact, a scent factory. We are a quite big animal with much surface that is not only loosing hair and skin particles all the time, but also sweating – something very special in the animal world. Next to that, we are dressed in different materials, which also loose small particles with each step. An on top, we are covered in many chemicals – perfumes, deodorant, soap, skin lotion… and our clothing is impregnated and washed with perfumed detergent. We know from men-trailing dog training that this is more than enough to make a clearly traceable trail. Under optimal circumstances, a dog can work such a trail many days after the person did it.

But we are trackers, not trailers. So, we add the deer components into the mix: hooves that, of course, also loose many particles and carry the decomposed, but still individual scent of a deer. The dog dosen´t need them to finish the track, but our argument is, of couse, we want the dog to follow a deer and not a human!

But how do we know what the dog is really following? The deer components, the human components, the ground disturbance, a mix of everything? At this point and with all we know, we can only come to one conclusion: we obviously teach the dog to follow a scent trail made by a human with cadaver parts attached to his or her shoes. There is no way to set its mind one one individual aspect of it that we consider most important – like the glant scent or ground disturbance.

So, how comes that a dog that trained tracking with the method of tracking shoes will work an natural track of a wounded animal? The answer is very simple: training or not, it would have done that anyway due to its instincts. The sensation created by a real wounded animal, with all the stress hormones and scents around, in combination with body fluids and blood, is addressing the predator nature of our hunting dogs.

So, why we even do all that efford to make artifical tracks? Well, it is NOT about teaching your dog to track a wounded animal. As we have seen, you cannot trick it into believing you are a wounded stag.

It is about teaching your dog the manners of correct tracking: low to the ground, focused, responsive to commands, slow, cooperative. It is about building up condition to master even long tracks. It is about learning to read its behavior when its on and off track. It is about creating different scenarios it needs to get familar with, like different soils, crossing roads and streams, changing temperatures and weather conditions.

The way we do your track – with tracking shoes, blood, walk-only – and the parameters – how many times you used a hoof, the amount of blood – is not that important at all.

Or what do you think?